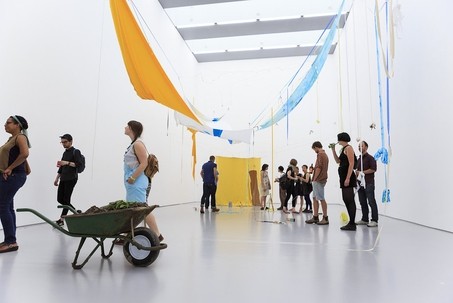 Self-taught artist Reto Pulfer uses painting, drawing, writing, music, found objects and everyday materials such as textiles, food and spices to create intuitive and yet complex synesthetic environments, “total artwork” that needs to be experienced. For his first solo exhibition in a British institution Reto Pulfer featured a site-specific installation for which the artist had crafted a large-scale net from hemp rope, hand dyed cotton ribbons and shoelaces which were hoisted like a giant sail in the main gallery at Spike Island. Acting as a kind of superstructure, it incorporated some of the artist’s earlier works made of bed sheets, which were sewn, zipped and tied together to form a shelter. A very successful exhibition which attracted around 4500 visitors and received a fantastic breadth of reviews and features.