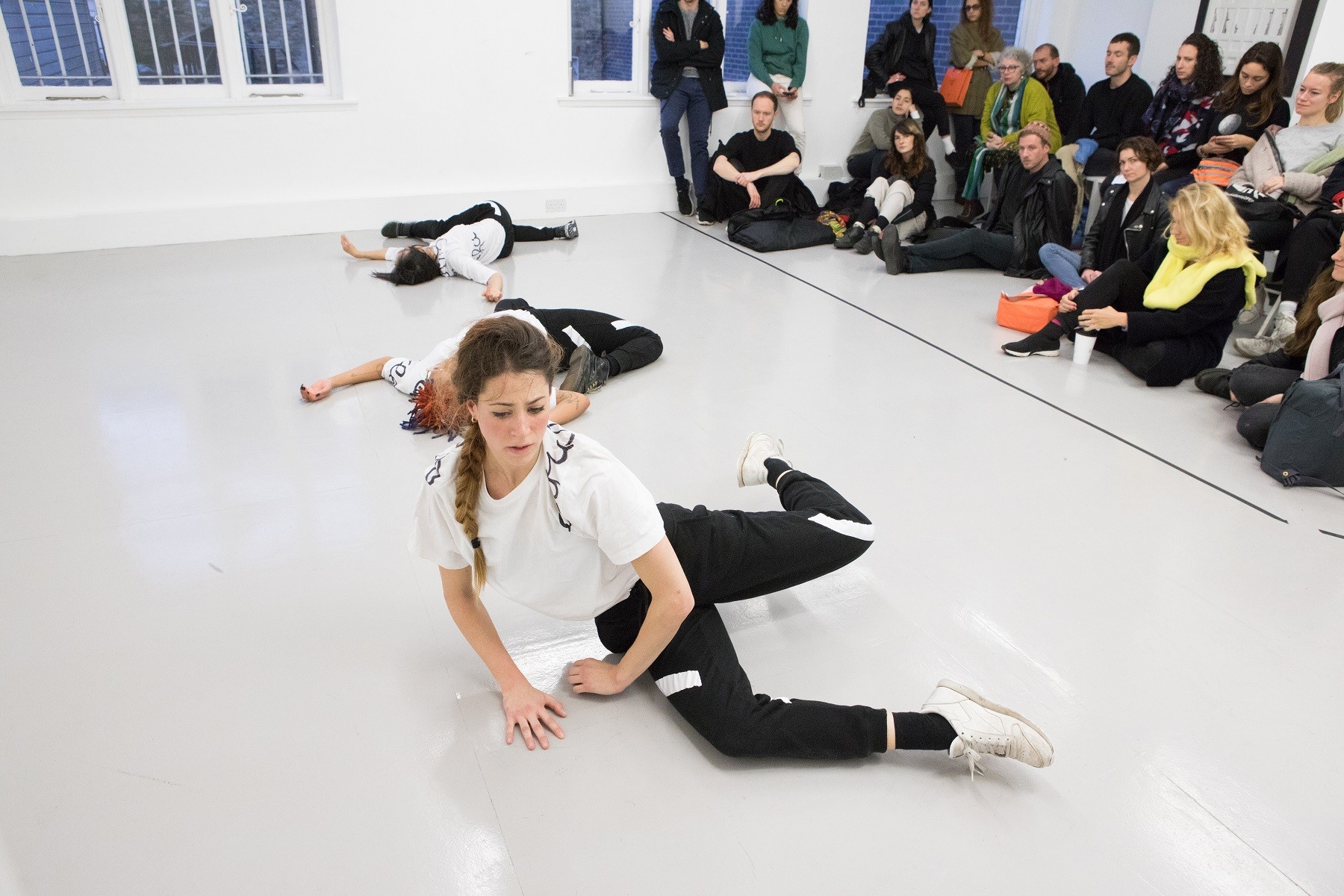 Your work investigates the nature of verbal and physical communication. How does your practice allow you to challenge the structures and the boundaries of language?
In my work I situate the body as a site of knowledge production used to explore alternative discourses within language and form. By using movement, tone, rhythm and voice, I aim to subvert the power of language and political relations which I believe are attached to normative vocabulary, opening up spaces or gaps in which to ‘embody vocabulary’ where new meaning can be created. My work with the performers (dancers, actors and singers) allows me to test new relationships between them, form alliances through mere sounds and movements, and find agency through this communication. My latest work ‘or what is’ is very much an example of that, whereby the performers use their voice and sounds as much as silence, movement and gesture to create a web of meaning which doesn’t rely on linear narrative.
What are your strategies to reach and share a multiplicity of voices?
My predominantly collaborative practice reflects my interest in other voices, other bodies and realities. By working together we explore a togetherness which lives through our individual subjectivity. We all move and speak differently, have different capacities and knowledge, but each of us has an asset to bring to the group which forms the community.
The moment of the performance is a sharing of what we found as a group, often associative and abstract, leaving enough space for the audience to find their own interpretation of the piece. I also try to show my work in spaces which have an inclusive policy like Mimosa House does. This allows me to share my work with a diverse audience I wouldn’t have access to otherwise.
The exhibition Mother Mercury celebrated the flows of energy resulting from new life and challenged stereotypical views about parenthood. How has raising children impacted your artistic practice?
My research has always circled around social topics, the creation of subjectivity and normative power structures. Being a parent and raising a child has certainly sharpened my understanding of these issues and added the questions surrounding parenthood, societal expectations of mothers, and who is allowed or expected to have children and who is not.
In practical terms it has made me more efficient and focused. There is no more time to dawdle around. The flow of energy in my life as mother, sharing breadwinner and artist is high, but so far it has benefited my practice. 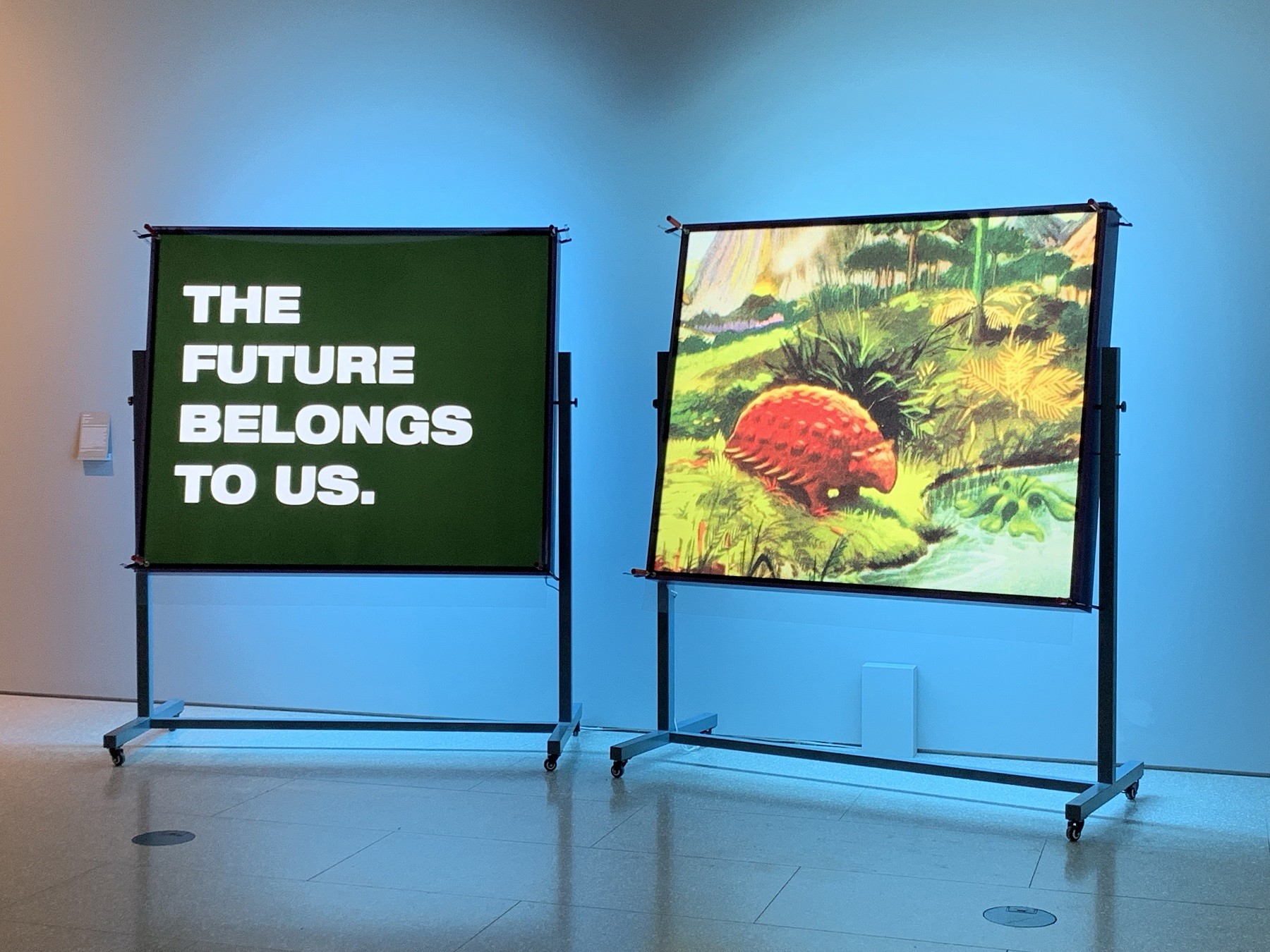 Basim Magdy, what is your pathway and what inspired you to do what you are doing today?
I was born in Egypt and lived and went to art school there, where I studied painting, and I was already working as an artist before I moved to Switzerland. My work gradually moved from paintings to dense and detailed installations which included elements of smell, light and text, to working with a super 8 mm and 16 mm film. Later, my interest in film as a tactile material led me to explore photography. The tangibility of film and my ability to touch it and alter its qualities with my own hands inspired many of my experiments with the medium, one of which is a process that I’ve been developing for the past five years which I like to call ‘film pickling’. In this process, a roll of film is exposed to an acidic or alkaline household chemical for a calculated period of time to add a dominant colour and alter the sharpness of the final image.
Your work Our Prehistoric Fate is exhibited in the Eco-Visionaries exhibition at the Royal Academy of Arts in London. What is the story behind the piece?

Our Prehistoric Fate had an interesting life. I initially created it for the D-O ARK Biennial which took place in an atomic shelter in Bosnia and Herzegovina, not far from Sarajevo. The bunker was built to keep Tito, his senior generals and his family safe in the event of a nuclear attack. When I arrived with a group of artists and journalists it was still intact in its original state.

The idea of the Biennial was to make work that responds to this place. I was especially fascinated by the war strategy room. In there, I found two light boxes similar to the ones used in the Eco-Visionaries exhibition. While I was there, I kept thinking of the scenario for which this place was built and what life would be like for those emerging from the bunker after a nuclear attack, the kind of life that would evolve from scratch.

I remembered an image of a dinosaur in an old encyclopaedia from my childhood of an Ankylosaurus, a dinosaur with odd characteristics, approaching water as volcanos erupt in the background. Somehow this poetic and mundane gesture by an extinct creature and the apocalyptic backdrop said a lot about the passing of time and the complexity of events.

On the other light box I added the sentence ‘THE FUTURE BELONGS TO US’, which is intentionally open to interpretation.

What are the different stages in your creative process? How do you start a project?
Every idea combined with a medium to create an artwork has a life of its own. One of the most enjoyable aspects of making art is this evolution of ideas. How ideas progress, stretch and start stacking on top of one another is as exciting as exploring a new medium, understanding its purpose and abilities, then stretching those in new directions. Making films allows me the excitement of what I call ‘composing layers of image, sound and narrative’ differently in each film. Photographic works coupled with text, or paintings incorporating text, become part of this process of creating meaning through the ambiguous space between the elements of those works. The most important thing for me is that I don’t want my work or my ideas to stand still and become repetitive, and therefore my use of a medium needs to constantly evolve.
This site uses cookies. By continuing to browse the site you are agreeing to our use of cookies.
Close